Today, I’m posting a very special First Chapter.  Tuesday Cross’s Of Flesh and Fire. This is an excellent fantasy.  I’ve read it twice now…seriously. All the pieces of a fantastic plot come together with mystery,  love, vampires, dragons, and a werewolf best friend!

On Wednesday, I’ll be leaving my review on NakedReviewers..  For now, I’ll leave you with a taste of Tuesday’s writing.  Enjoy! 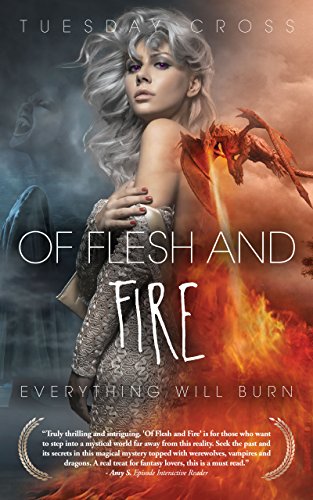 Vampires, werewolves, and dragons… oh my!

Looking for an action packed twist on paranormal fantasy with a touch of romance?

‘Of Flesh and Fire – Book I’ by Tuesday Cross delivers a fast-paced fantasy adventure,
perfect for adults of all ages. If you enjoy vampires, werewolves, and DRAGONS… you’ll love this story.

I lay there, trying my hardest not to choke. The heavy scent of smoke invaded my body, coating my lungs, stifling me. All around me were the sounds of screaming, sobbing, and fire– my body shivered involuntarily. I shifted my focus back to breathing, trying to quiet my body’s urge to stand up and run. I won’t be able to do anything if fear gets the better of me.  Anger flashed hot in my stomach. After everything I’ve done to get my life back, here it is. Ending. The beam overhead groaned like some sort of wounded animal, making me flinch. Clenching my eyes shut, I dove into my memories. Any event of my past was better than what was about to become my last.

I’m six years old, sitting in Ms. Carla’s tidy sun-bleached office. I lightly swing my legs back and forth, listening to the rhythmic ba-bump, ba-bump as my heels bounce off the base of the bench. Behind me, through the door, I can just make out the whispers of my foster parents. They don’t say it outright, but I can tell. They don’t like me. Ms.Carla, lovely as always, encourages them to keep trying. Keep up with the counseling. Every child needs a forever-home after all, and who said adoption was going to be easy?

I’m twelve years old, running through the woods. My foster brother is laughing, but we’re not having fun. I’m frightened because I know how this game ends. Doubling back I head for my secret hiding spot, and while crossing over the rocks I make a stupid mistake. Trying to jump too fast, my shoelace snags on a fallen branch. I try to catch myself, but tumble heavily into the deep crevasse beneath my destination. If I hadn’t had been so afraid, I wouldn’t have rushed. I spent hours fuming and nursing a sprained arm before the fire department found me. Shortly afterwards my foster ‘parents’ shut me in my room as punishment for wasting everyone’s time.

I’m seventeen, crouched in the dusty attic, pouring over my collection of contraband. Wonder Woman and Supergirl– I soaked up the adventures depicted on the black and white pages. My name had been repeated, growing steadily louder and louder for the last five minutes. The heavy footsteps of the man I was supposed to call father reverberated below. It was only a matter of time before he thought to check the attic, and found me and my treasures. Sighing, I carefully tucked three favorites into the bag by my feet. The footsteps halted directly beneath the attic door, but it didn’t matter. I was out the window, down the lattice, and into the night– like the monsters I was leaving behind had never existed at all.

And now I’m here. What a stupid situation. I shouldn’t have come to this town. I shouldn’t have stayed here so long. I’m an idiot for thinking I could make a life here. I opened my eyes and stared into the flames, defiant. If my life’s about to end,  I’m going to watch it go.

Delivering me to the darkness.

Dusk came and went, and a dewy midnight settled like a blanket over the grounds of Rowling-Burroughs University. In the Eastern Quarter of the Historic wing, Headmistress Mildred Midwood sat stiffly behind her desk. Her brown eyes focused on the map spread out before her. Her face was calm, but she drummed her nails against the wood of her desk. A light knock at the door pulled her out of concentration, and Midwood’s eyes shot up to meet a gentle gaze she knew well.

“Mildred, there’s another fire,” he replied.

“In the village, at a home for young women.”

Midwood stood and turned, disappearing into the air with a loud crack, leaving only the smell of burning ozone behind.

Midwood reappeared in the shadows, a safe distance from the frantic scene unfolding before her. Even from her position across the street, Midwood felt the searing heat clawing her face. Looking left and right, Midwood observed nothing else out of the ordinary. Silent cars stood sentinel along the street and a cool breeze played through the leaves of the trees.

Everything was as it should be, except for the structure in front of her. It was burning at temperatures so obscene that the flames were a ghostly blue-white. The brave men of Vernon Village’s Fire Department worked diligently, but the fire carried on, unaffected.

Thank the gods this street had been evacuated. The fewer witnesses, the better.

Spreading her arms out by her sides, palms facing the blaze, Midwood hummed low and deep. The sound reverberated through her sternum, growing louder until it matched the cracking and whipping of the flames. A soft grey light emanated from her palms as Midwood took slow steps into the middle of the damp street. One by one the men of VVFD ceased their work, whispering amongst themselves. Midwood did not see them. In fact, she could not see them. Her eyes were rendered useless as her inner eye focused on the fire, seeking its source. It was as if the flames were alive, eluding her efforts to snuff them out.

Fire magic. The thought chilled Midwood to her core, and she redoubled her efforts to douse the flames. Midwood advanced to the sidewalk in front of the building, the ghastly blue flames illuminating her ebony skin. The men of VVFD remained glued to the spot, unable to tear their eyes away. Midwood clasped her hands violently together in front of her heart, snuffing out the raging blaze– the force of her efforts knocking her to the ground.

Stunned, the firefighters looked to the structure, and back to her. A tall, bear of a man came forward to help her to her feet. Midwood was not a frightening woman to behold, yet she saw a glimmer of fear in his eyes as he hoisted her up.

“Chief Johnston, thank you,” Midwood said, brushing off her skirt.

“Well Headmistress, it’s you we ought to thank,” he mumbled.

It was obvious to Midwood that as usual Johnston was polite, but not out of respect.

Whispers from the men rose in the background. (These lot only get involved when something’s wrong) – (I don’t like it, we shouldn’t have to owe them anything.) – (How do we know that she didn’t set the fire to begin with?) She shrugged off their words. If her suspicions were correct, then the current situation was much more important than normal vs supernatural politics.

“If you don’t mind, Chief, I need to inspect the ashes.”

“Ma’am! We’ve been fighting this fire for hours, and the whole time it’s been burning hotter than the bloody sun. You’re not going to find anything in there.”

“All the same, I would like to have a look around.”

“Chief.” Midwood looked him square in the eye. “I’ll be fine.”

Johnston huffed and stood out of the way, gesturing towards the smoldering remains. Midwood nodded politely, hiked up her skirt, and made her way inside.

The stench of smoke enveloped her as she waded through the destruction. It pained her to know how many people must have died, their bones turned to dust. As she made her way to the center of the cinders, Midwood couldn’t shake the feeling of dread which had taken root within her. She thought back to the orphanage she inspected after it burnt, and then the hostel. No survivors.  Someone is targeting these places. but they wouldn’t continue if they had already found what they were looking for… If I’m right. Stopping for a moment to release her skirt from a piece of twisted steel, something caught Midwood’s eye. Laying under the ashen remains of a structural beam, as if asleep, was a young woman. Her skin smooth and milky white, untouched by the violence.

The gods have mercy!  Bending down, Midwood gathered the naked form in her arms, lifting her up with the strength of a much younger woman. Blocked from the sight of Chief Johnston and his men, Midwood turned on the spot, disappearing with her precious cargo into the heavy night air.