This week, I have the very talented PE Kavanagh.  She had two new novels out last just week for your reading pleasure.  I’m sure you’ll love her as much as I do. 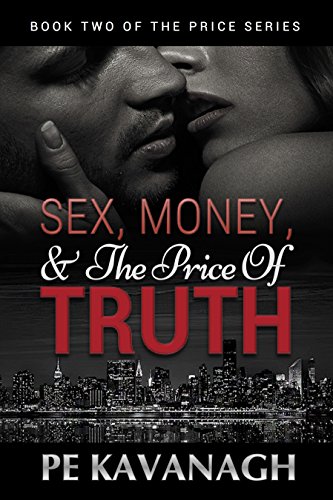 Grab it on Kindle Unlimted

She needs security.
He seeks redemption.
THEY FIND EACH OTHER INSTEAD.
The façade of Lola’s carefully-crafted life begins to crumble the moment the sexy stranger walks into her neighborhood coffee shop. Aidan is smart, stunning, and impossible to refuse.
She isn’t looking for love and he’s too good to be true.
Ominous dreams and looming suspicions keep guiding her to stop. But she doesn’t.
Until the deception that brought them together becomes the danger that tears them apart.
Born in betrayal and threatened by revenge, their future demands they find the courage for bare, brutal honesty.
It comes at an impossibly high price…
AND IT’S THEIR ONLY CHANCE.

Sex, Money, and the Price of Truth
PE Kavanagh

The sun accompanied Aidan nearly the whole walk to midtown, dipping behind the skyscrapers and into the Hudson River as he entered the lobby of his building. The elevator doors opened directly into his loft and to a spectacular view of the Empire State Building, a daily reminder why he had chosen to live far from the financial district.
Getting out from under all those soul-less financial towers helped him stand up straighter. Even the neighborhood was more peaceful. Not that he interacted with his neighbors much, but the occasional sighting of an artist or family made him feel less like an alien in a sea of clones.
He stood in front of the window, watching the buildings change from gold to grey in the fading daylight. This was a much better view than that repulsive bar. Going to Galaxy had been a mistake. There was no talking sense into Mack, hell-bent on revenge, as if he was the only guy to ever get dumped. Hopefully, he’d straighten out before doing something really stupid.
Aidan shook off the uneasy feeling around Mack’s threats to him and that woman, and grabbed a beer before heading into the spare bedroom. The sight of the stack of boxes against the far wall, a reminder of his upcoming departure, brought relief. Two more weeks and all this hell would be in his rearview mirror. He could turn his back on the mess he’d made, as well as the one on the horizon when all his bad choices caught up to him. That same feeling of imminent disaster he’d gotten before each of the recent financial meltdowns buzzed through his veins. He couldn’t be happier to be getting out.
He shoved the two small boxes labeled ‘Jessica’ further into the corner. His ex-fiancee would probably never get her stuff. Why was he even saving it? Maybe the same masochistic streak that kept him on Wall Street for so long kept him connected to her.
She was just like the rest of them, completely satisfied by a stallion on her arm, a huge diamond on her finger, and the good life in her future. Sure he thought all that crap was important too, until it fell apart. He shook his head at his own stupidity and gullibility. I should have known better.
It was book-packing day. The floor-to-ceiling bookshelves against the far wall contained some of his most treasured possessions. Most of them would have to go into storage with the rest of his stuff, but a select few would accompany him on his great escape. Whitman’s Leaves of Grass, a book of Neruda’s poems, and Ulysses by James Joyce were definites. Perhaps Jung’s Red Book and something by Emerson, to get his mind right.
The promise of a dramatic escape had picked Aidan up off the floor, and given him hope that what had broken could be fixed. Southeast Asia was as far as he could get from Manhattan. He would start out in Thailand. Bali was a must, as was Vietnam. Other than that, he had at least a year, maybe two, to recover from the train wreck his life had become. Maybe he’d never come back. A permanent sabbatical. He called it his parole, even if nobody else got the joke.
Aidan frowned at the growing pile of books on the floor, already more than he could bring, and he’d only scanned the top two shelves. The whole point was to leave the city empty-handed. Only a total purge would begin to wash him clean, absolve him of his disgrace, wrest the life he never wanted from his clenched fists. If he could let go of all he was, maybe someone worth living would emerge.

Everything’s different. Aidan stared out the taxi window at the city that used to feel as integral and familiar as one of his limbs. Exhausted from nearly three days of traveling across the planet, he welcomed in that familiar rush of energy that had sustained him for all those years. New York City was a miracle, even compared to the exotic sights of his recent travels.
As the taxi rounded the corner of his block, he perched forward. Other than different names on a few of the businesses, his neighborhood was unchanged. Maybe the world had stayed exactly the same, but he had very little in common with the man who had fled New York more than two years prior.
The doorman’s eyes widened as Aidan stepped out of the taxi.
“Mr. Connelly! You’re back!”
“I sure am, Edgar.”
The uniformed man took the largest of Aidan’s bags. “Welcome home, sir. You’ve been missed. I’m glad to see you looking so well.”
Aidan ran a hand over his full beard. “That’s kind of you to say. How’s everything with you?”
“Can’t complain, sir. Can’t complain. Added two more grandkids to the stable. We nearly have a baseball team now.”
Aidan patted the older man on the back as the elevator opened. “Congratulations, Edgar. That’s wonderful news.”
“Your place has been well taken care of. I hope you agree.”
A sense of relief greeted Aidan as the elevator doors opened to his loft. During more than one dark moment, he’d imagined it had been looted and vandalized. Maybe the maintenance company he’d hired had stopped coming, and it would be a maze of cobwebs and dustballs. Or they had stolen every tangible piece of his life. Most of the time he didn’t care.
But at that moment, seeing his familiar belongings made him swallow against the push of an emotion he couldn’t quite name. Sadness had been his companion for so long. But this sensation was different, harkening back to a time so long before it might have only existed in his imagination. He was happy to be home.
The spacious emptiness felt like a glorious reprieve from the constant bombardment of people and activity that had accompanied him from place to place. Bangkok was crowded. Bali was chaotic. India was madness. But they were exactly what he needed, pummeling him into submission and breaking him of the fever that had taken over his mind. He breathed peacefully now, slept well, and lost the repulsion at being in his own skin.
Aidan walked through his home, checking each of the rooms. Edgar was right. It was pristine. Almost certainly cleaner than the day he left. Other than the boxes that filled the far corner of the living space, everything was exactly as he had left it.
He had taken a risk, shipping back all the art and decorative pieces he’d bought throughout Asia, but all the boxes appeared to be intact. Aidan ran his hand over the edge of the largest one, nearly as tall as him and three times as wide. Unpacking would have to wait. Maybe for a while. He wasn’t sure he’d be staying.
This city held too much history, too much evidence of his mistakes, too many reminders of how far he’d strayed. He loved New York, but didn’t know if he could be the man he wanted to be in this environment. Maybe he’d leave the city, head out west, re-create himself.
After a call to his parents, Aidan dialed his best friend. “Hey, Tommy. I’m back.”
“Finally! How are you feeling?”
“Really good. Bleary, but happy. I’m sure I’m going to crash in a few hours, but for now, I’m loving all the buzz of New York. My place looks perfect, too. Like I never left.”
“Well, we definitely felt your absence. I’m going to be in the city tomorrow morning. I’ll drop by and we can hang. I want to hear everything.”
“Sounds good, man. Can’t wait to see you.”
The line remained silent for long enough that Aidan checked to see if the call had dis-connected.
Tommy cleared his throat. “I’m so glad you’re home, Aidan. I was scared you’d never want to come back. After everything.”
“Can’t say I didn’t think about it. But I’m here.”
“See you tomorrow.”
Telling his best friend that he was thinking about leaving again, this time permanently, was going to be a hard conversation. At least he felt clear enough to make a decision. But there was no rush. First he’d have to re-acclimate to civilization.

Aidan cleared the steam from the mirror after a luxuriously long shower. He hadn’t missed much of his previous lifestyle, but a shower hadn’t felt that good in a long time. He picked up the tube of shaving gel, ready to eliminate the evidence of his transformation, and paused. Sure, he looked like someone who’d been living on a beach for a few years. But this was him, now. No pretense, no show, no being what he was supposed to be. He put the tube down and walked out of the bathroom. Civilization could wait another day.
His fatigue grew harder to ignore after getting dressed. He needed to stay awake for a few more hours to begin adjusting to the new time zone. A long walk was the perfect option, not only for his body, but for the thoughts tumbling around his head. Lots of decisions had to be made. Would he try to work? Going back into the financial industry was out of the question, but he was hardly qualified to do anything else. Thankfully, money wasn’t going to be an issue for a very long time. Maybe never. But being idle for too long was asking for trouble.
He stopped in the lobby to slip a hundred dollar bill into Edgar’s hand. That guy was a high quality human being – honest, caring, hard-working without being obsessed about money. Aidan needed more people like that in his life.
He walked out into the sunny day, grateful for the late summer breeze. There were times the stifling heat and humidity of the tropics had felt like a well-deserved punishment. He had run away to paradise, but a little bit of hell had followed alongside. Heading uptown to Central Park with a smile on his face, Aidan was certain of his redemption.

PE KAVANAGH has been a professional dancer, MIT-educated engineer, corporate executive, spiritual teacher, and chef. These days, her favorite titles are author, mother, and hot stuff.

One thought on “The First Chapter Showcase, PE Kavanagh”